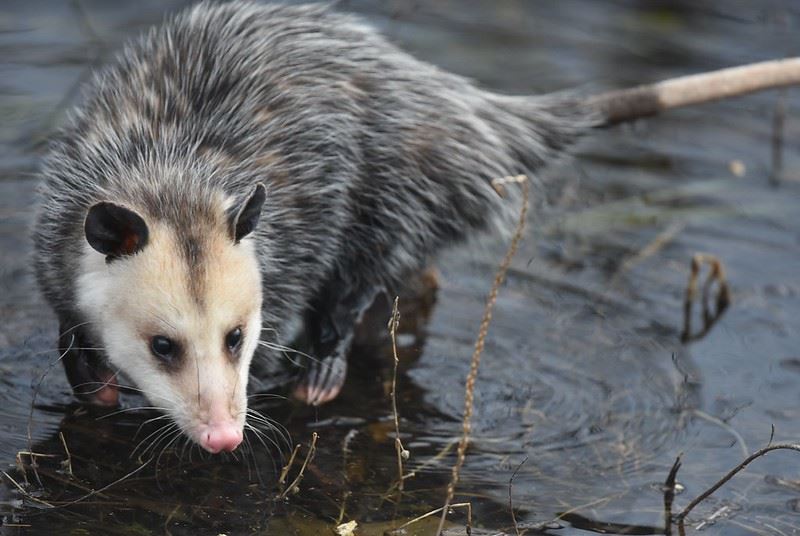 Tips for living with Opossums

For additional info check out http://opossumsocietyus.org/

As the development of once rural areas increases, the opossum continues to be pushed

out of its natural habitat and forced to live in a more urban environment.

Opossums are extremely adaptable and have successfully made the transition

to accept people as their neighbors. With a little tolerance and understanding

you can do the same.

Considered rodents by many, this is a common misconception. Opossums are marsupials, or pouched mammals, and are related to the kangaroo and the koala. The opossum holds the distinction of being North America’s only marsupial. We should not consider them as pests, but beneficial to the environment, as they eat all kinds of bugs and insects including cockroaches, beetles, cricket and spiders. Snails and slugs are considered a delicacy. They also help keep the rat and mouse population in check. Opossums have well earned the title of “Nature’s Little Sanitation Engineers.”

By nature opossums are non-aggressive, non-destructive and do not pose a threat to humans. However, when excessively threatened they will attempt to defend themselves.

Our best advice is to enjoy watching the opossums,

but LEAVE THE OPOSSUMS ALONE.

Opossums should be allowed to live in their natural habitat. They are opportunistic animals and will often move into an area that has been damaged and then vacated by another animal. Unfortunately, the opossum is usually blamed for the damage.

OTHER OPTIONS If you find an opossum continues to return to your area, try eliminating the things that are attracting it. Clear away bushes, woodpiles and other hiding places, pick up fallen fruit from trees, and do not leave pet food out over night. Try leaving an outdoor light on at night.

OPOSSUM PROOF YOUR ENVIRONMENT Make the area where you live less desirable. At night, keep doors and garages closed, and close windows that are located next to tree limbs and fences. Check your subfloor and exterior vents for access into your walls and attics; secure any holes with wire mesh or spray foam.

Question: There is an opossum in my yard. What do I do?

Answer: Nothing. Leave the opossum alone and enjoy watching wildlife in your own backyard. However, if the opossum is injured or an orphan (less than 7 inches from nose to rump) then contact the Opossum Society of the United States, a local wildlife rehabilitator, a veterinarian, or your local animal shelter for help. Opossums are beneficial eating unwanted pests around your home and garden such as snails, slugs, spiders, cockroaches, rats, mice and snakes. Opossums are free gardeners!

Question: They make my dog bark! What do I do?

Answer: A dog will bark at anything it sees or hears. The best thing you can do for the opossums AND your neighbors is to train the dog or keep the dog indoors at night. This will also prevent the dog from injuring or killing an opossum.

Question: Will an opossum attack my pets?

Answer:: In general, opossums are docile, non-aggressive animals and will not attack your pets. They prefer to avoid confrontations. If escape is not possible then the threatened opossum may  “play ‘possum”, show its teeth, or bite in self-defense, as any animal would.

Question: Will an opossum bite my children?

Answer:: Children should be taught not to attempt to feed or touch a wild animal. Opossums are nocturnal, that is they sleep during the day and come out at night, so the chance that a small child will come into contact with an opossum is slim. Opossums prefer to sleep in dark, secluded places. If your children are playing in this type of area then there is a greater danger of being bitten by a poisonous spider or snake.

Question: How can I keep opossums out of my home or garage?

Answer:: Close all doors, pet doors and unscreened windows before dusk. Put food away so the opossum will not be tempted to enter. If an opossum enters, provide a safe exit route and leave the room.

Question: The opossums eat the fruit off my trees or garden, how do I keep them out?

Answer:: Opossums prefer to eat the rotting fruit that have fallen to the ground. Keep opossums out of trees by cutting branches away from the ground, fences and roof. Cover the trunk with heavy plastic sheets obtained at hardware stores and secure with duct tape. This will prevent the opossums from climbing. A cut-up plastic trash can will work.

Answer: Any mammal can get rabies. However, the chance of rabies in an opossum is EXTREMELY RARE. This may have something to do with the opossum’s low body temperature (94-97º F) making it difficult for the virus to survive in an opossum’s body.

Question: Can I get Murine Typhus from an opossum?

Answer: Murine Typhus is carried by the cat flea (C. Felis), so named because worldwide the flea host of choice is the cat. The flea has expanded its range to dogs, opossums, rats, mice and other animals. Be aware of flea infestations and if noted treat your yard with insecticide.

Question:  How do I trap and relocate an opossum?

Answer: Do not trap! Opossums are normally transient animals, staying only 2-3 days in an area before moving on. Removal is neither necessary nor desirable. If opossums were eliminated from an area, the population of roof rats and other pests would proliferate. Opossums serve an important role by controlling the unwanted, harmful pest population around our neighborhoods. So now we should ask you a question. After learning about the benefits opossums provide, why would you want to trap and remove an opossum?

Trapping and relocating does not work.

If you are determined to remove an opossum then encourage it to do so on its own by removing whatever is attracting it to your area. You must determine what is attracting the opossum to your area and remove the attractants or other opossums and animals will come and fill the vacated niche. Opossums are usually attracted by pet food left outside and dense shrubs to hide under.

If you are determined to trap then use humane trapping practices. Make sure the opossum will be trapped safely in a humane trap AND released unharmed. Please do not trap during the spring to fall baby season or animals may become orphaned and die.Keep in mind that once you have captured an opossum you are responsible for its humane care and can face prosecution if the animal is treated cruelly.

Make sure that the trap and whatever you catch in it is safe from inclement weather including direct sunlight, heat stroke is a killer for trapped animals.

The City of Galveston no longer provides trap rental in the absence of an animal bite.

You may contact a local pest control company regarding trapping services.

You may also purchase your own humane trap from either a local retailer or online.

If you still have questions regarding Opossums in your area contact the Animal Services Unit to discuss your situation and what else you may be able to do to live in harmony with our indigenous wildlife.

The Animal Services Unit will remove wildlife from the living area of your home.

The Animal Services Unit will also pick up and relocate trapped animals in personally owned traps.